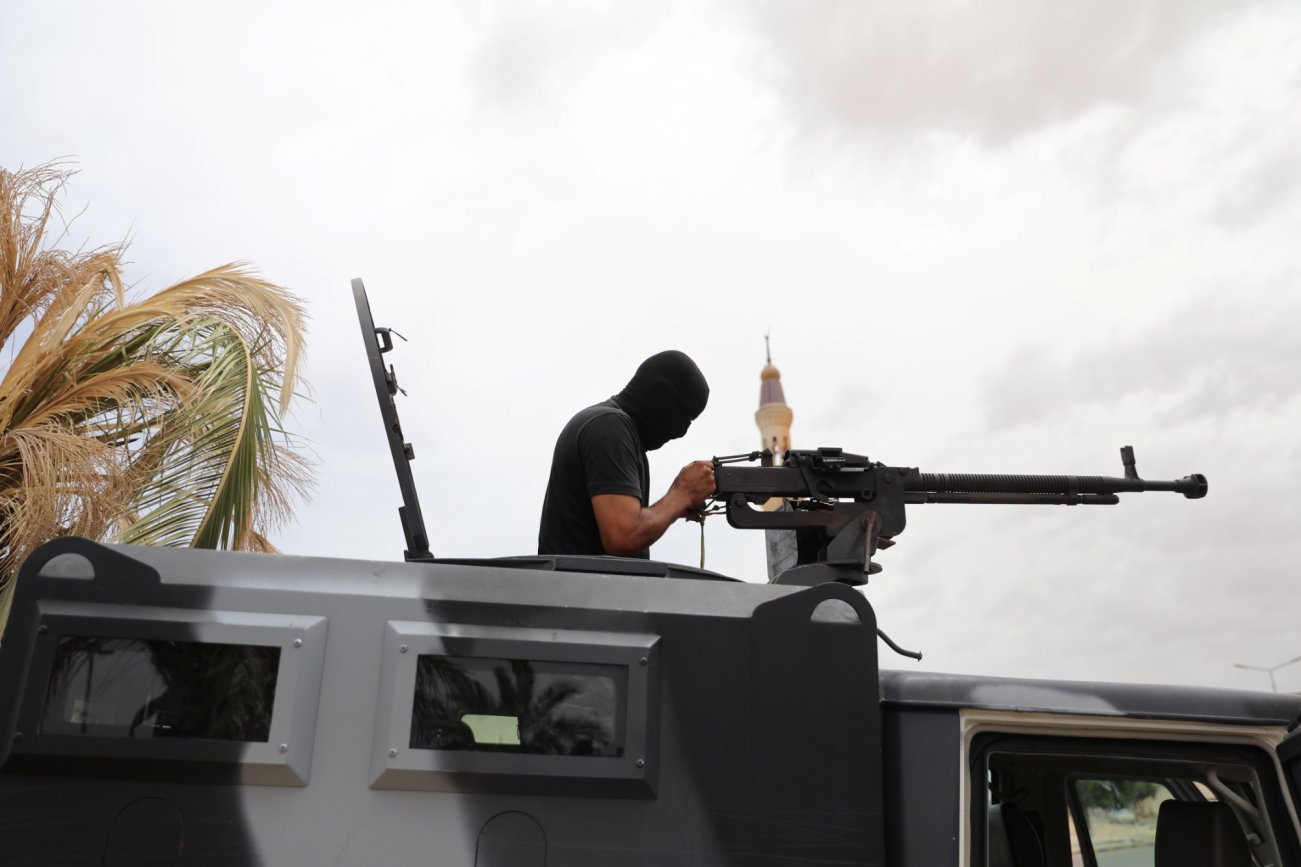 The United States must appoint a Special Envoy for the Eastern Mediterranean to devise a negotiated solution to the Libya conflict.

When the leader of Libya’s official government declared his Tripoli stronghold liberated last week, it was at a press conference in Ankara with Turkish president Tayyip Erdogan. Curiously, Erdogan’s Russian counterpart has provided much of the support for the opposing side in Libya’s civil war.

This underscores how Libya is escalating into a destabilizing proxy war, worsened by America’s often confusing and consistently hands-off approach. Increasingly, the United States can no longer afford such an attitude, which exacerbates the fighting and offers Turkey and Russia strategically valuable footholds in the Eastern Mediterranean.

It is fitting that “leading from behind” was first voiced as U.S. policy toward Libya, as detailed in our new report by the Jewish Institute for National Security of America. According to the U.S. embassy in Libya, Washington “is proud to partner with” the UN-backed, Tripoli-based Government of National Accord (GNA) led by Fayez al-Sarraj—despite it being an Islamist-dominated regime with little hope of uniting the country.

At the same time, the United States has not articulated clear policy toward the rival Tobruk-based Libyan National Army (LNA) of Gen. Khalifa Hiftar. Reflecting this equivocation, American diplomats have led no charge to address the fighting. Instead they mostly echo European initiatives for a ceasefire or, most recently, have begun coordinating policy with Turkey.

Turkey and Russia are pouring into this vacuum. Last year thousands of Russian mercenaries helped Hiftar nearly capture Tripoli, backed by weapons and airpower from France, Egypt, UAE and others. Fearing the collapse of a fellow Islamist government, Erdogan significantly boosted military support for Sarraj. In exchange, Turkey secured a bilateral pact ostensibly recognizing its vast offshore territorial claims in the Eastern Mediterranean.

Erdogan’s intervention has been momentous, enabling GNA forces to reverse much of Hiftar’s gains from last year. Russia and others are escalating their military support for the LNA in response.

These events are driving Libya to a strategic inflection point. As long as the United States remains aloof, the only question becomes how—not if—the conflict poses growing challenges to American interests and regional stability.

Backers on both sides could simply keep flooding reinforcements into the country, producing an ever-bloodier stalemate. By worsening the security vacuum and physical destruction inside Libya, this would enable Islamic State to regrow and worsen the spread of coronavirus countrywide—either or both of which could drive renewed refugee flows toward Europe.

Or Turkey and Russia could tacitly divide Libya between themselves. This reflects the country’s deep divisions between western and eastern halves, and could mimic the Astana process they initiated to determine Syria’s fate without U.S. input. The two already are in close contact, including discussing plans for a settlement.

Such an agreement would logically appeal to both Ankara and Moscow, in no small part because it would create so many problems for the United States and allies.

A sphere of influence in Libya would represent Erdogan’s first success in propping up the Muslim Brotherhood around the region – a policy which has threatened most every U.S. Middle East ally. Equally important, it would encourage further gunboat diplomacy by bolstering Ankara’s claims, however illegitimate, to the energy-rich waters between Turkey and Libya. This would directly threaten energy development by Greece, Cyprus, Israel and Egypt, all of whom Washington sees as helping reduce Europe’s dependence on Russian natural gas.

De facto partition of Libya could appeal to Moscow for the same reason. As with Syria, Libya also provides a valuable beachhead ringing NATO’s southern flank, especially if Russia installs advanced air defenses or other weaponry. Moreover, and unlike Syria, Libya would give Putin another potential lever over European energy.

Either outcome—stalemate or Russo-Turkish collaboration—shows the need for long overdue American leadership on Libya and the broader region.

The United States must appoint a Special Envoy for the Eastern Mediterranean to devise a negotiated solution to the Libya conflict. Among his or her top priorities would be limiting Ankara’s support for the GNA, including leveraging the option to redeploy U.S. military assets out of Turkey.

A complimentary priority is to curtail Russian support for the LNA. Diplomatic, energy and security cooperation among U.S. regional partners is crucial. By fully supporting the new Egypt-led alliance that includes Greece, Cyprus, France and UAE, as well as growing Greek and Cypriot ties with Israel, the United States can help build up its regional partners as a counterweight to both Russia and Turkey.

While increased U.S. diplomatic presence would shift the balance of influence at Ankara’s and Moscow’s expenses, the United States also should strengthen bilateral military ties with Athens, including increased U.S. rotational deployments and perhaps even permanent basing in Greece.

American policymakers will need to act quickly, however. As events of just the past few weeks show, Libya can go from afterthought to crisis before Washington takes notice.