A mutated version of the coronavirus that has gripped Europe and the West is more infectious because it doesn’t break as often while inside the body, a study has found.

Researchers at The Scripps Research Institute in Florida say the ‘spike protein’ that the virus uses to attach to cells in the airways has adapted since January.

It used to break off regularly while trying to bind to receptors in people’s airways, which it would use to gain entry to the body, but is now more resilient, they say.

A genetic mutation which scientists around the world have been picking up on for months appears to have caused this spike to be less likely to snap, and also to force the coronaviruses to produce more of them to make itself more infectious.

As a result the virus appears to be approximately 10 times more infectious than it was when it first jumped to humans in China at the end of the year, scientists say.

The mutated version of the virus, dubbed G614 – a change from D614 – is a tiny change in its genetic make-up that scientists weren’t sure what to make of when they found it.

But by May research had found it had become the dominant strain being found in Covid-19 patients across the UK, US, Canada and Italy.

The spikes on the outside of the coronavirus (illustrated in red) are what it uses to latch onto cells on the inside of a victim’s airways. A mutated version of the virus appears to have developed stronger spikes so it is more likely to infect someone if they breathe it in, scientists say

ACE-2 receptors have a shape which matches the outside of the coronavirus, effectively providing it with a doorway into the bloodstream, scientists say

Lead researcher on the Scripps institute’s study, Dr Hyeryun Choe, told the Washington Post the mutation seemed to have happened to ‘compensate’ for the weakness of the spike protein in the past.

The Post reported it appeared to have become approximately 10 times more infectious as a result of this change.

The way the virus enters the body is by using its spike to latch onto a receptor – called an ACE-2 receptor – inside someone’s airways.

ACE-2 receptors are essentially tiny gateways that the virus uses to get into the blood and then multiply rapidly, destroying cells around them in the process and triggering illness.

Dr Choe and her colleagues examined the differences between the spike proteins, dubbed S, on the outside of both versions of the coronavirus.

They found: ‘These results show SG614 is more stable than SD614, consistent with epidemiological data suggesting that viruses with SG614 transmit more efficiently.’

The spike was stronger, they said, and as a result the virus was better able to bash through the gateway of the ACE-2 receptors.

Dr Choe told the Washington Post: ‘The epidemiological study and our data together really explain why the [G variant’s] spread in Europe and the US was really fast… This is not just accidental.’

However, this improved spike strength did not seem to be making people any sicker – or any less sick.

This, they suggested, could be because the spike had nothing to do with the virus’s ability to reproduce – to replicate – once it was inside the body.

HOW AND WHY CAN VIRUSES CHANGE OVER TIME?

Viruses are known to change over time because they are subject to random genetic mutations in the same way that all living things are.

These mutations can have various effects and many will only happen briefly and not become a permanent change as newer generations of viruses replace the mutated ones.

However, some of the mutations might turn out to be advantageous to the virus, and get carried forward into future generations.

A virus may change its structure by accident but turn out to be more infectious that way, meaning it can infect more hosts, reproduce more, and become more dominant than its less fertile predecessor.

Or if a virus becomes less dangerous to its host – that is, it causes fewer symptoms or less death – it may find that it is able to live longer and reproduce more.

As a result, more of these less dangerous viruses are produced and they may go on to spread more effectively than the more dangerous versions, which could be stamped out by medication because more people realise they are ill, for example.

The mutation may then be taken forward in the stronger generations and become the dominant version of the virus.

In an explanation of an scientific study about HIV, the NHS said in 2014: ‘The optimal evolutionary strategy for a virus is to be infectious (so it creates more copies of itself) but non-lethal (so its host population doesn’t die out).

‘The “poster boy” for successful long-living viruses is, arguably, the family of viruses that cause the, which has existed for thousands of years.’

The process of reproduction, and using the body’s resources to achieve this, is how the coronavirus causes illness.

Dr Choe’s study added: ‘An interesting question is why viruses carrying the more stable SG614 appear to be more transmissible without resulting in a major observable difference in disease severity.

‘It is possible that higher levels of functional S protein observed with SG614 increase the chance of host-to-host transmission, but that other factors limit the rate and efficiency of intra-host replication.’

The paper was published online on bioRxiv without being reviewed by independent scientists.

Researchers in the UK and US had in May noted that the G614 version of the virus had become ‘the dominant pandemic form in many countries’.

They said it was first found in Germany in February and had since become the most common form of the virus in patients worldwide – it appears to force out the older version whenever they clash.

Viruses mutate naturally all the time and it is not usually cause for alarm but should be studied in case they change so much they become unrecognisable to the body and immunity from a first infection cannot protect against them, as is the case with flu.

A study done by scientists at the University of Sheffield and Los Alamos National Laboratory, New Mexico, found that D614 appeared to have been the virus’s original state in humans, and the one found in Wuhan.

It made up the vast majority of all Covid-19 infections in China, and Asia as a whole, and also seemed to be the first version of the virus to appear in the countries they studied.

However, the mutated version – G614 – started to appear soon after in Europe and North America in particular, before going on to take over as the dominant virus.

‘A clear and consistent pattern was observed in almost every place where adequate sampling was available,’ the researchers said.

‘In most countries and states where the COVID-19 epidemic was initiated and where sequences were sampled prior to March 1, the D614 form was the dominant local form early in the epidemic.

‘Wherever G614 entered a population, a rapid rise in its frequency followed, and in many cases G614 became the dominant local form in a matter of only a few weeks.’ 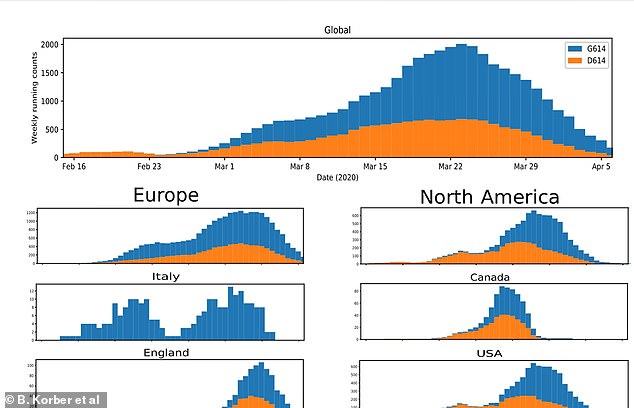 The newer strain named G614 (blue) appeared later on in the pandemic but, since then, has dominated the older, slower-spreading strain D614 (orange) in most areas of the world. It was the only one recorded in England but all the patients sampled were taken from one city – Sheffield

Although the older D614 strain (orange) managed to remain dominant in Asia for most of the pandemic, it was quickly superseded by the mutated version in Western countries and Africa, which started recording outbreaks later on

Most countries outbreaks began with the older D614 strain (shown in orange). In China and Singapore this remained the dominant strain but in most countries worldwide it was edged out in March by the mutated G614 version

They said the G614 mutation may give the virus a ‘selective advantage’ which makes it better able to bind to cells in the airways, or to shed viruses which it uses to reproduce and spread.

It could do this because the D614G mutation appeared to affect the shape of the ‘spike’ protein that the virus uses to attach to a person’s cells and infect them.

A sample of 447 hospital patients in Sheffield showed that people had a higher viral load when infected with G614, meaning they had a higher quantity of viruses circulating in their body.

The researchers wrote: ‘An early April sampling… showed that G614’s frequency was increasing at an alarming pace throughout March, and it was clearly showing an ever-broadening geographic spread.’

And they added: ‘Through March, G614 became increasingly common throughout Europe, and by April it dominated contemporary sampling.

‘In North America, infections were initiated and established across the continent by the original D614 form, but in early March, the G614 was introduced into both Canada and the USA, and by the end of March it had become the dominant form in both nations.’

WHAT IS AN ACE-2 RECEPTOR AND WHAT DOES IT HAVE TO DO WITH COVID-19?

ACE-2 receptors are structures found on the surface of cells in the lungs and airways which work with an enyzme called ACE (angiotensin-converting enzyme) to regulate blood pressure.

Its exact function in the lungs is not well understood but studies suggest it is protective against lung damage and low levels of it can worsen the impact of viral infections.

Scientists say that the coronavirus which causes COVID-19 enters the body through the ACE-2 receptor, which the shape of it allows it to latch on to.

This means that someone with more ACE-2 receptors may be more susceptible to a large viral load – first infectious dose of a virus – entering their bloodstream.

People who have higher than usual numbers of ACE-2 receptors may include those with diabetes or high blood pressure because they have genetic defects which make them produce more.

High levels of ACE-2 receptors may also be protective, however.

They are thought to be able to protect the lungs during infection and a study on mice in 2008 found that mice which had ACE-2 blocked in their bodies suffered more damage when they were infected with SARS, which is almost identical to COVID-19.

Smoking has in the past been repeatedly linked to lower than normal levels of ACE-2 receptors, potentially increasing the risk of lung damage from COVID-19.